Published by University of California Press, in 1992 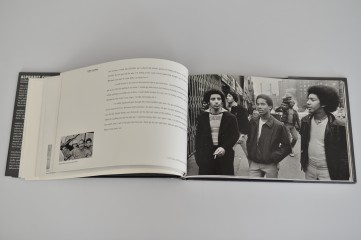 This photobook portrays the Puerto Rican community in the Lower East Side, located in specific area called « Alphabet City » since mid-1980s. Interesting to recall that that this neighborhood had been since the late 19th century composed of tenement housing, with no running water at that time, slums and known as the red light district of Manhattan.

Geoffrey Biddle’s photographs capture with clarity the people of the neighborhood and their struggle to survive in a ghetto decimated by criminality and drugs. The photos are imbued with a deep humanistic feeling, revealing with a compassionate eye, the coexistence of poverty and drugs with joy and resilience.

Many photographs are accompanied by a brief text, narrated by the subjects themselves – without any filter – describing their dreams and struggles with love and compassion. These descriptions give a clearer understanding of what it takes to live the brutal reality of AIDS, violence and drugs. These testimonies often also reveal the contradictions of humanity, such as this one from « Pistol » :

« My Moms was a good person. She cared, but she couldn’t hack us no more. She kept saying she gonna kill herself, too. The day she died, she told me that my father hit her, and I told her, that was good for you for not cooing for him. And she left. I didn’t know she took the pills though. The next day, they told me she was dead…She came up to me to help her, to how they call it ? Calm her down, comfort her. But I didn’t. I just started breaking on her. »

The book is built around two series of photographs. The first series, the most important one, includes the photos taken in 1977, when Geoffrey Biddle went to Alphabet City for the first time. Ten years later Geoffrey returned to the same place and photographed many of the same subjects and interviewed them. This second series allows the author to give some perspective on the destiny of many of the people he had encountered the first time. In some cases, people continued to live there, some died due to the use of drugs, violence, and AIDS, and others ended up in prison. The stories are compelling and rarely beautified with a happy end.

Overall, the work of Geoffrey Biddle, complemented by an introduction of Miguel Algarin (himself a member of the Nuyorican movement and a resident of the neighborhood) offer a poignant description a community deprived and forgotten in the center of New York City. The book gives a face and a voice to the « Loisada » residents, and to some extend to all those living in any urban ghetto across the United States.

This entry was posted on November 7, 2017 by New York Photobooks in New York photobooks, The social commentary.