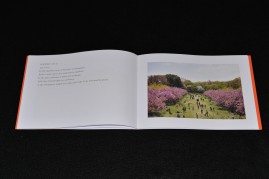 This photobook could be considered a children’s photobook, a genre that hasn’t been published that often. Many publishers feel reluctant about using photos to illustrate books for children, as they are perceived too realistic for kids who may be more impressed and attracted to imaginary worlds. My own experience with my daughter has shown me the opposite; children can be enthusiastic and marveled by a photobook, as long as the story is captivating and develops a child’s imagination beyond what is observable on the pictures.

“Everywhere Always” as described in the foreword, is a story about a child’s relationship with his home: Brooklyn. He asks us to search for him, and as we search, we look with fresh eyes at the magical city he sees. In the spirit of Walt Whitman’s passionate odes to his hometown, the little boy finds himself in all the places he visits – in the parks, at the beach, in the flea market, at the playground, at the zoo. It’s as much a story about finding a little boy in Brooklyn as it is about find Brooklyn in a little boy.

This entry was posted on November 7, 2017 by New York Photobooks in New York photobooks.