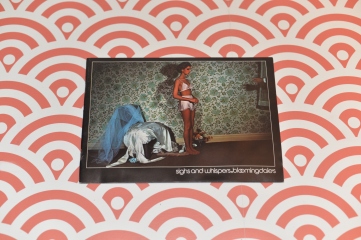 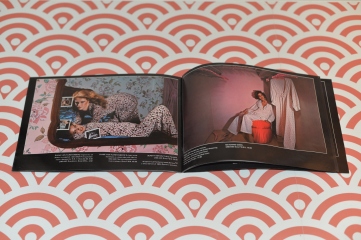 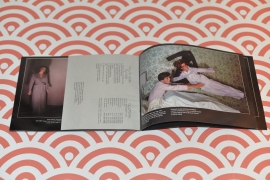 Published by Bloomingdale’s in 1976

Bloomingdale’s commissioned the Parisian photographer Guy Bourdin to shoot their lingerie catalogue, which resulted in this highly collectible “photobook” – Sighs, Whispers for Bloomingdale’s.

Second, Sighs and Whispers for Bloomingdale’s is the only publication, even though a thin catalogue, in which Bourdin had full creative control. Bourdin didn’t publish any book during his lifetime, besides publishing in fashion magazines – in particular Vogue and Harper’s Bazaar, for which he worked for from 1955 until 1987.

Third, Sighs and Whispers is a more than a simple fashion catalogue – it is an artistic publication. Bloomingdales gave Bourdin complete creative freedom and never saw a single picture until the day the photographer left back to France. He had very specific demands and took him about one month to complete the project. He started with 65 of New York’s top models, who were all dismissed under the pretext that there were not beautiful enough. Bourdin decided to find himself six unknown models. He was so meticulous that a single picture such as the model flying through the air into bed and her lover’s arms was reshot so many times until the girl fainted. The result was astonishing and the catalogue a piece of art. The New York Post described it at that time as an “ambiguous vignettes, suggestive of je ne sais quoi – smoldering-satin-eroticism, triple-bedded double entendres, Stepford wifery, Bergman heavy breathing and Story-of-O-isms.”

This entry was posted on February 17, 2016 by New York Photobooks in New York photobooks.